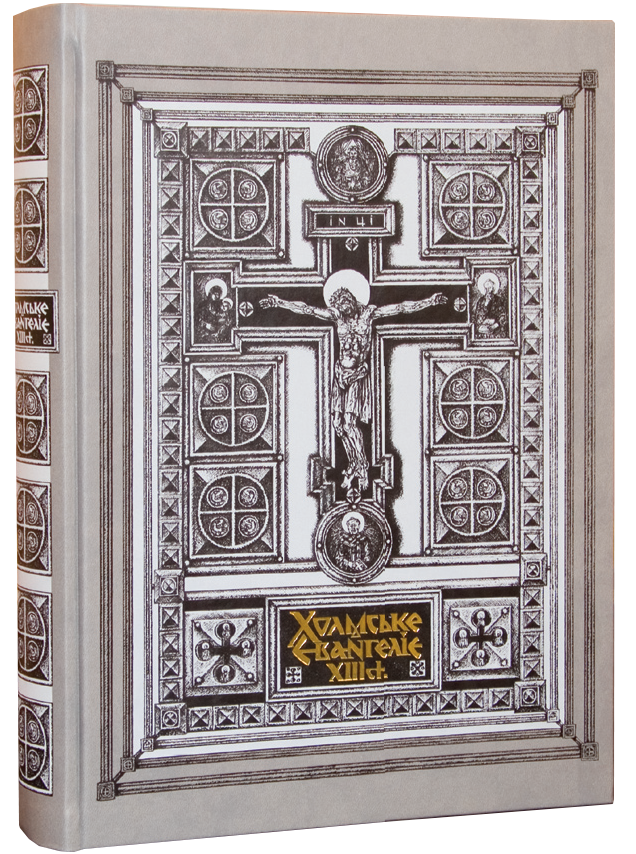 The Chelm Gospel of the 13th century, which is kept abroad of our country. It is returned to Ukraine in facsimile form thanks to the efforts of the Volyn Orthodox Church of Ukraine, the “Gorobets” Publishing House and    people who care of their culture. This book is the facsimiles publishing, the continuation which was started off by publishing house. It gives access to the sources of the Slavic written language.

Since the past, the Chelm Gospel has attracted attention of the researchers who studied its linguistic features, ornamental design, miniatures, textology, etc. But it was studied mainly with other manuscripts, not individually; moreover the majority of researchers did not have any opportunity to study this book in original, so they used reprinted copies of separate pages, made and published in the 19th century. In addition, the history of the Chelm Gospel itself has not got much researching attention.

“The Chelm Gospel of the 13th century (Moscow, Russian State Library) has a unique position among the cultural heritage of the Ukrainian lands, first of all as a unique original masterpiece of the Chelm environment of the princely period. It is a rare retelling of one of the still underestimated significant original pages of the national tradition, - Chelm of the period of King Danila Romanovicha (1201-1264). The exceptional historical significance of the "forgotten" and with the subordination of the Polish state administration from the second half of the 14th century is the Chelm area of the cultural life. It clearly showed itself from the very beginning of its own historical tradition in the middle of the 13th century, returning from non-existence with the latest researches. The starting point of this process was the finding and introduction to the scientific use of the 2000 the Chelm Icon of the Virgin (Luck, Volyn Regional Museum).Its discovery and understanding made it possible to see in a new light not only the Chelm of the times of King Danila Romanovicha, but also many aspects of the Ukrainian cultural tradition of princely times in the Western Ukrainian lands in general. The publication of the The Chelm Gospel, (along with the Chelm Icon of the Virgin) is an exceptional significance of the authentic original masterpiece of its short-lived the highest elevation period and it  is intended to be the next significant step in returning from the non-existence of this masterpiece page of the national history.” (From the article "The Artistic decoration of the Chelm Gospel of the 13th century, Miniatures of the 16th century are added. By Volodimir Aleksandrovich)

Scientiests who worked on the Chelm Gospel of the 13th century:

Sponsors of the Chelm Gospel of the 13th century